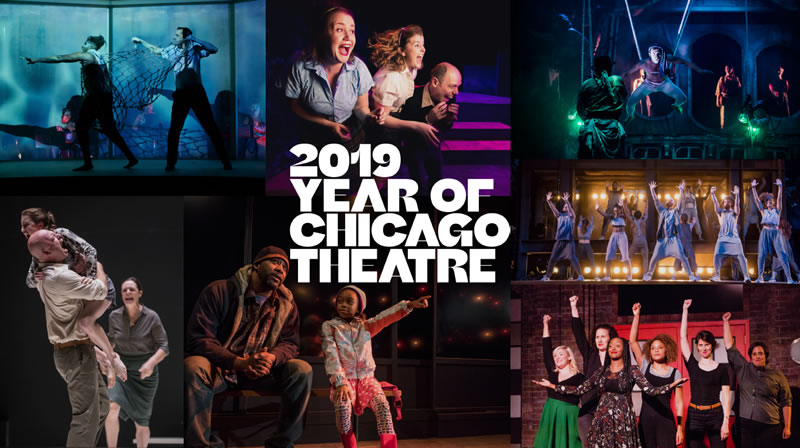 Under the leadership of Mark Kelly, Commissioner of the City of Chicago’s Department of Cultural Affairs and Special Events (DCASE), and Deb Clapp, Executive Director of the League of Chicago Theatres, the Year of Chicago Theatre (YOCT) engaged five committees with over 150 theatre professionals to shape strategies in Inclusion, Legacy, Marketing, Partnerships & Special Events.

Accomplishments of the Year of Chicago Theatre include:

• Developed and launched first ever citywide brand for Chicago theatre involving input from hundreds of Chicago theatre professionals and made available broadly so the theatre landscape would benefit from YOCT visibility, such as in program ads and playbills

Significant Financial Resources Out to the Community

• Secured more than $1.3 million in added funder support for YOCT, most which was redistributed as commissions and grants for theatres, focusing on funding equity to Chicago’s South and West Sides

• Grants included $835,750 in financial grants to 116 theatre and dance artists and organizations – and $448,650 to support new work and performance fees to 157 theaters and theatre-makers, across CityArts, Microgrant and Individual Artist Program grants

• Chicago Park District’ Night Out in the Parks presented more than 200 free performances in 125 Chicago parks with more than 40 theatre partners, bringing live theatre to all 77 community areas and all 50 wards

• $50,000 in dedicated funding through YOCT Microgrants supporting projects which increase diversity and access in Chicago’s theatre sector, with a focus on Chicago’s South and West sides

– For a full list of grant recipients, visit chicagoculturalgrants.org.

• Greater visibility and investment in the growth of cultural assets in neighborhoods, particularly of note on Chicago’s South and West Sides. 2019 marked the first full year of programs for University of Chicago’s Green Line Performing Arts Center, and reemergence of residency spaces such as Kennedy-College’s Performing Arts Center.

• The League of Chicago Theatres extended its Erasing Racism training series, whose goal is to build a collective vision for a more just, equitable, more open and transparent, diverse and inclusive theatre community. More than 200 Chicago theatre staff and artists have participated to date.

• League of Chicago Theatres had presence at all major DCASE events to showcase the entire breadth of Chicago theatre, handing out 40,000 theatre guides and countless brochures and flyers for individual theatres

• YOCT theme featured across major programs such as Theatre Stage at Taste of Chicago, SummerDance kickoff and programs in collaboration with Theater on the Lake, special Hot Tix presence at major events and Millennium Park

• Arts in the Dark Parade aligned with Year of Chicago Theatre and 14 theatre organizations receiving funding to produce spectacular displays to 50,000 attendees

• Significantly strengthened ties within and across Chicago’s theatre community through ongoing Year of Chicago Theatre committee engagement and numerous connection points throughout the year, many which will continue after 2019

• Plan for Spring 2020 symposium to discuss wrap up of 2019, continued long-term needs for the sector and plans to go forward

Thank you to Chicago’s theatre community for we have done together to strengthen and showcase Chicago’s unparalleled theatre scene in 2019! Special thanks below to our committees and the many partners that helped make our work possible.

Grant Support for the Year of Chicago Theatre

Thanks to these neighborhood chambers and SSAs who helped to promote and advance the Year of Chicago Theatre:

View All Auditions Post An Audition
Connect With Us:
Send this to a friend